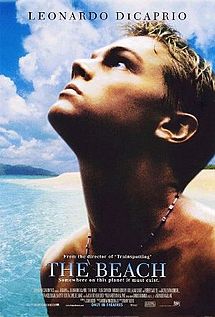 Richard (Leonardo DiCaprio), a somewhat annoying American backpacker in Thailand meets Daffy (Robert Carlyle), a psychotic Scotsman who gives him a map to a legendary beach. When Richard then finds Daffy has taken his own life, he decides to follow the map, taking a French couple with him. There he finds a hippy colony led by Sal (Tilda Swinton) and they think they have found paradise. But nothing is really what it seems.

I’d heard for years that this was a terrible film, and I disagree. I don’t think it is that great, but it’s not appalling. I didn’t love the plot, I felt as though it was supposed to be really pushing things, but even when horrible things happened, I didn’t feel that connected and so it didn’t seem that bad. Even death. What I did love what the late-ninties music and feel that had hints of Trainspotting and the like, and it reminded me of better things.