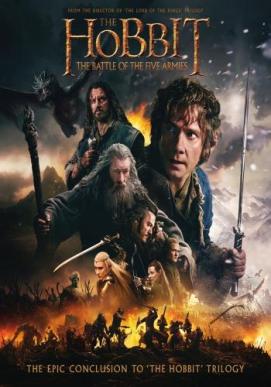 The dragon has come and gone, now the Dwarf King Thorin (Richard Armitage) has gone a bit power-hungry, and what with the various different people all coming to the one place to fight, he needs to get his head straight. I think more happened, but I mostly recall this and some awesome fight scenes.

It’s over! That was my main feeling when I finished the film. As so many have said before me, three films to tell this story were two too many. I thought that if the story could be sustained over three films, I’d be fine with it, but it just seems to be a bit of a cynical, money-grabbing decision. You know what annoys me the most? Having recently watched a few older Peter Jackson films, I was curious to want to see what else he has, and I feel annoyed that I had to go through these to get to what is next. Now, I’m not so excited. If you haven’t seen Heavenly Creatures, go watch it, especially if you are feeling a bit bruised and battered by the long haul that has been Lord of the Rings and The Hobbit. It shows the wonder of what Peter Jackson can do outside of Middle Earth.

The Hobbit: The Battle of the Five Armies was nominated for an Oscar for Best Achievement in Sound Editing.