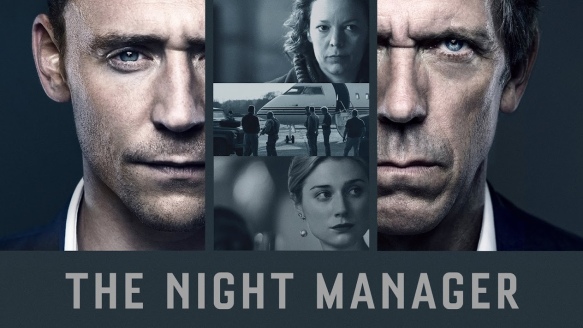 Tom Hiddleston plays Jonathan Pine, the night manager in a hotel in Cairo who starts a relationship with a woman with some connections to a deep underworld and turns up dead. Some time later, living the life of a loner high in the alps (but still a night manager) he meets Richard Roper (Hugh Laurie), one of those dodgy connections. He ends up contacting British Secret Service (though possibly called something different) and working for Angela Burr (Olivia Colman) to try to bring Roper down.

This is one complex story. There are six episodes, it goes around the world, there are heaps of different characters and sometimes it is hard to tell who is good and who is bad. I found that I got distracted at times and found I had to go back and figure out what I missed. None of that is criticism – or, rather, it is criticism of me and my watching habits as opposed to being criticism of the show. It’s brilliant and clever – my only criticism is that I felt no chemistry between Tom Hiddleston and the woman at the start, and given that it is that passion that is supposed to drive the whole plot, I feel like I missed something.