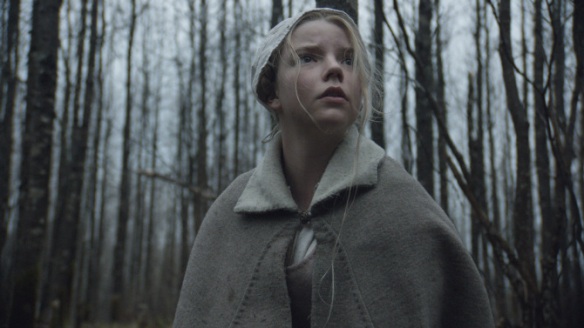 It’s 1630 in America, so there are a lot of forests and not a lot of buildings. William (Ralph Ineson) and his wife, Katherine (Kate Dickie) are very religious, but have been shunned by their community. They take their four children to a remote area to live the hard but good life. Then Katherine has a baby who suddenly disappears during an intense game of peek-a-boo, and strange things start to happen, especially revolving around their intense daughter, Thomasin (Anya Taylor-Joy).

Somehow, this film won best director  for Robert Eggers at Sundance. The fact that I say ‘somehow’ probably gives you some idea of what I thought of it. I thought it was terrible. The soundtrack was kind of good, though way heavy-handed. The scenery was amazing, but for me, that was about it. To be fair, I was exhausted and was nodding through some parts, but if the hype is to be believed, this is one of the scariest films ever made. I don’t do scary films because they freak me out far too much. So probably not that scary. Really, I found it quite boring. Having said this, I spoke to three other people after the session and while one agreed with me, the others quite liked the film; in fact, one loved it. Goes to show we can have differing opinions! (Though personally, I wouldn’t recommend this film to anyone). If you don’t fear it, check out the trailer.

Currently, The Witch does not have a release date for Australia, but given the hype, I’m sure it won’t be too long before you can check it out and make up your own mind.