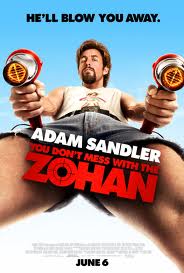 The Zohan (Adam Sandler) is Israel’s greatest solider, but he really wants to cut hair.  After faking his own death at the hands of Palestine’s greatest soldier, Phantom (Joh Tuturro), he escapes to the US and joins a small salon where he can cut hair and have sex with any woman who moves. But then Phantom discovers that Zohan is still alive and *yawn* there are explosions and crotch thrusting and so on and so forth.

Is this one of the worst ever Adam Sandler films? Yup, I sure hope so. It’s stupid, puerile, tedious and makes me wonder what the hell happened to the once-marvelous John Tuturro.