Jane (Meryl Streep) and Jake (Alec Baldwin) are happily divorced. Their children are grown up and have left home, Jane runs a successful bakery (very overly successful judging by in insane excess of her life) and Jake is now living with the woman he left Jane for. At their son’s graduation, they end up having a few drinks and fall into bed together. Suddenly, Jane is having an affair with her ex-husband – and all the while being pursued by the architect who is redesigning her perfect house.

I had a lot of trouble getting past Steve Martin’s lack of facial expressions and the utter ridiculous decadence of the way they all live (such as the insane renovations that this woman is having put in for a house where she lives alone). But once you get past that, it’s a fun film with a lot of laughs. 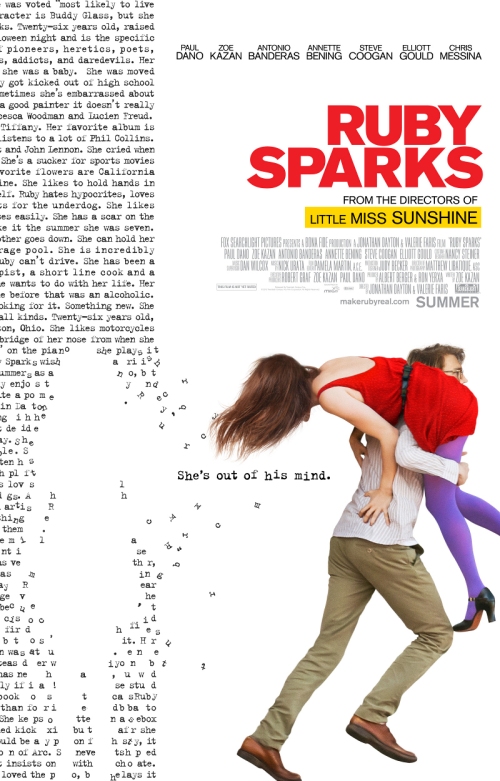 I wanted to like this film. I truly did. Paul Dano is a terrific actor with a lot to give the world. But I just couldn’t bear another story of an emotionally stunted young man who falls in love with a manic pixie dream girl. The main difference in this film is that rather than meeting the quirky character in a doctor’s office or pysch ward, she is a creation of his brain.

Calvin Weir-Fields (Paul Dano) is an author who had a best-seller at eighteen years of age. Now, ten years or so later, he is still struggling with a second novel. He has no friends and the only women who find him interesting are obsessed fans of his first book. His shrink advises him to write about a girl who likes his fearful little dog, Scotty. Ruby Sparks (Zoe Kazan) is invented. Calvin becomes obsessed with Ruby, then suddenly, she is actually in his life.

I wonder if I would have liked this film more if Ruby was not such a manic pixie dream girl. Perhaps if Calvin was as he is, but Ruby was more real; less annoying. Perhaps the film would have been less of a cliché. Perhaps I would have enjoyed this clever premise more. As it is, I found it tired and boring and the end was totally disappointing. Plus, it made me start to hate other films which have similar premise, no matter that they do it better. 500 Days of Summer, Garden State. Even Eternal Sunshine of the Spotless Mind. Ruby Sparks, you’ve broken my heart.