Murra (Shantae Barnes-Cowan) is an indigenous teenager living in a fraught relationship with her mother who goes off the rails on a regular basis. Her policeman uncle Ian (Mark Coles Smith) gets her into an adventure camp program with three other teenagers. Elvis (Pedrea Jackson) is cheerful and confident, Kylie (Mikayla Levy) is obsessed with her older boyfriend and won’t listen to her mother, and Sean (Andrew Wallace) is a nervous worrier. Lead by Mitch (Tasma Walton) and her side-kick Fernando (Carlos Sanson Junior)they take cameras and head into the outback to learn about photography and themselves.

I enjoyed this a lot. It took a while for me to switch off the part of me that knew that, under child safe laws and regulations, much of what happened would actually not occur – or the parts that could would have been dealt with extremely differently. Once I pushed that aside, I enjoyed it, especially the parts with the four teenagers having fun and finding ways to support each other.

The latest iteration of Batman, this stars Robert Pattinson as Batman/Bruce Wayne and follows the story of Batman working out the clues of The Riddler who is killing political figures.

Touted as being the darkest Batman yet, it probably was. I found myself struggling to engage with the plot, and found myself longing for the Batman films I grew up with. I think I’ll probably need to watch this again to see if I can appreciate the film or if, perhaps, I’m all Batman-ed out. Still, it did inspire me to go back to the Batmans of my youth, for better and worse.

Based on their own experiences, The Big Sick tells the story of comedian Kumail Nanjari and his wife Emily Gordan (played in the movie by Zoe Kazan). They are in love, but struggle with Kumail’s attempt to reconcile this relationship with the expectations of his Pakistani family. Then she becomes ill, and as she lies in hospital in an induced coma, he meets her parents Beth (Holly Hunter) and Terry (Ray Romano) and comes to terms with just how important Emily is to him.

There’s a lot to love about this film, even discounting the wonderful cast. The challenges faced as a couple, the expectations of family, but I think my favourite aspect was the barriers that remained when Emily is brought back to consciousness. So often in relationships, one person reaches a certain point of understanding without the other, and this amplified when one has literally lost time through being in a coma. It is funny, very cleverly so, and very good. 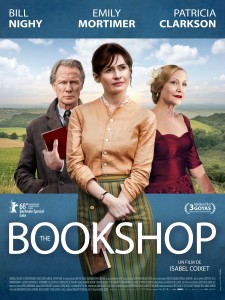 1959, Florence (Emily Mortimer) opens a bookshop in a small English town but is met with resistance from one of the powerful locals.

This was a boring film. I wanted to love it but it was slow, boring and I just couldn’t connect with it at all. I wanted to care, but in the end, I just wanted it to finish.

When a boring government worker meets his new co-worker who is physically identical but interesting and charismatic, his life is overturned.

This is arty and strange and cinematographically interesting and I couldn’t stay engaged. It reminded me of the David Lynch films that I loved in my youth, and I know that there are many viewers who would love this film. I don’t know whether it is that my tastes have changed over the decades or what, but this was not a film for me.

When her grandmother in China is diagnosed with a terminal disease, Billi (Awkwafina) is disturbed to learn that her family plan to keep this diagnosis from her. She and her family travel to China to visit and attend a wedding, Billi struggling to keep the information from her grandmother and enjoy the time they have together.

This is a tricky one. The idea of keeping an elderly family member in the dark about their health seems so wrong. I’ve read discourse from disability advocates talking about this film as it is not uncommon for disable people to be left out of discussions about their health and treatment. Is it right for a family to make this choice for an elderly relative? While I struggled with the concept of the film, there was a lot I thought worked well. A young person coming to terms with aspects of their family, in particular their parents; to have their understanding of who these people are challenged is a fascinating concept, and an experience that most people have at some point in their life.

Based loosely on the real French Dispatch, an outpost of the New Yorker magazine, this is a lovely collection of shorts about different characters and events reported. It’s got the stylings of Wes Anderson; beautiful art design, animation, wacky stories… if you like Wes Anderson’s films, it’s likely you’ll enjoy this.

Michelle Darnell (Melissa McCarthy) is a force in the business world, until she is sent to prison for insider trading. On her release, she realises she has nothing and no-one, but convinces her former assistant, Clare (Kristen Bell) to let her stay with her until she can build herself up again. Michelle forms an unlikely friendship with Clare’s daughter, Rachel (Ella Anderson) who inspires the building of a new empire on the back of a Girl Scout type movement.

Ugh. I love Melissa McCarthy, but I do not like some of her films. I tend to enjoy her when her performance is less over-the-top comical, and this film could have worked a lot better if it had felt more authentic. Or perhaps I’m just not the audience for it. I also struggle when there is a massive plot point that I don’t believe – in this case, the premise of the scheme that Michelle uses to make her comeback just didn’t work for me. I know I’ll find more of Melissa McCarthy’s work that I love. This wasn’t one of them.

The CIA have covert agents, such as Six (Ryan Gosling) who carry out secret and often immoral missions including assassinations. But when Six gets wind that he’s in danger, he uses all the skills he has to save himself and protect the child of his handler.

Lots of shooting and fighting and running, not a lot of plot. This reminded me of John Wick, but with a few additional key characters. And instead of Keanu Reeves, there’s Ryan Gosling, with Chris Evans as an excellent baddie. I loved it – a wonderful terrible film.

This beautifully animated film has three stories connected through the one house. It’s very, very strange, but stunningly beautiful. It left me a bit confused and I can’t say that I particularly loved it, but there was definitely some beautiful emotion in all of the strangeness.