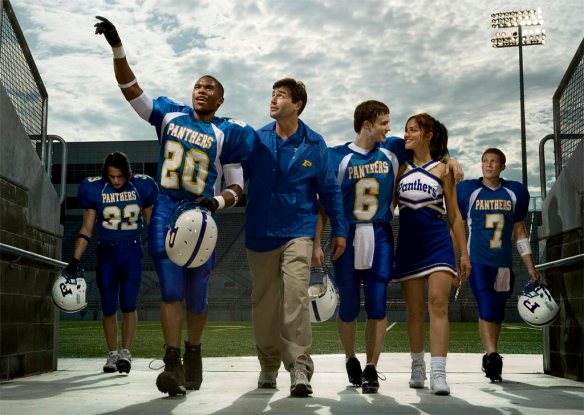 Grid Iron. I just don’t get it. It’s a whole bunch of men with heaps and heaps of padding and protection running at each other and slamming into each other. Over and over again. There is strategy involved but I don’t really get it. Yet it tends to make good drama – think films such as Remember the Titans or Any Given Sunday, or the fabulous documentary Undefeated. It is no wonder then that a television series like Friday Night was such a huge success. It’s based on a book by HG Bissinger that was made into a film with Billy Bob Thornton that, of course, I now have to see.

The key storyline is about a high school football team, the Panthers, from a small Texan town, who hold all of the hopes and dreams of the town. In the first game of the season (this is a bit of a spoiler alert, but it happens in the first episode so I’m gonna put it out there) the star quarterback is involved in a clash that leaves him in a wheelchair with spinal damage. The rest of the first season essentially follows the coach and the team as they try to pull themselves together through adversity after adversity.

I have become totally hooked. The football side of it is only one part – admittedly, a very important part, but it only takes up a small part of the screen time. There’s all the family politics, but it is mostly about the romantic lives of the kids. Whilst I am totally caught up in the stories, it doesn’t feel like a high school drama. I feel like the actors are too old for the characters they are playing. Too mature, too old-looking, just not quite… teenagey. Perhaps it is the type of interactions that just seem far too adult for these young people.  I’ve got four more seasons to get through. I reckon I’ll be able to suspend my disbelief and just enjoy them.