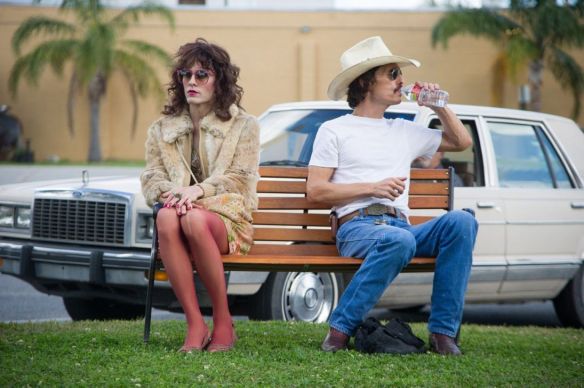 Dallas 1985. Ron Woodroof (Matthew McConaughey) is a hard-living man, drinking, cocaine and having sex with any lady that stands still long enough. Then he gets sick, and the doctor diagnoses AIDS, giving him thirty days to live. After a brief moment of denial, Ron does some investigating and discovers Dr Vass (Griffin Dunne), an ex-US ex-doctor who is using alternative medications in Mexico. Ron has some success with these and decides to bring them back to Dallas, starting up a business known as a buyers club. Prior to getting ill, Ron was extremely homophobic, but now he finds most of his business is with the gay community. He strikes up an unlikely friendship with cross-dressing Rayon (Jared Leto) to try to fight the system and keep himself and many others alive, regardless of how the government tried to fight him.

It’s not an easy film to watch. McConaughey looks extremely ill for much of the film, and the politics of the situation are horrible. (A few years ago, I watched several documentaries, notably How to Survive a Plague, and cannot believe the attitudes of the US government. Although I believe that, should a similar situation happen now, it probably wouldn’t be that different. There might just be more people with a louder voice fighting).

I feel that the true-life story of Woodroof is an excellent story to tell. It shows a number of sides, although it should always be recognised that it is a fictionalised version of the truth, so it should not be treated as a documentary. It’s not an easy film to watch, but it is good in an almost sadtacular fashion.