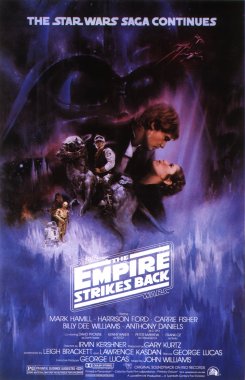 Okay, so this is the post Star Wars world. And just because things are going well, doesn’t mean that things will continue to go well, and things are now not going well for our heroes. I must admit, I don’t remember the details of this film nearly as much as I remembered Star Wars. Still, not loving this film, but not hating it.

What did I not like? Oh, dear, the acting. Mark Hamill is a lot better in this film, but overall, jeepers, it’s all so terrible and heavy-handed and yawn. Plus, could the scooby gang be any cheesier? What did I like? The ice planet was pretty cool. And there were some cool fight scenes.

The Empire Strikes Back won Oscars for Best Sound and Visual Effects and was nominated for Best Art Direction – Set Design and Best Music – Original Score.