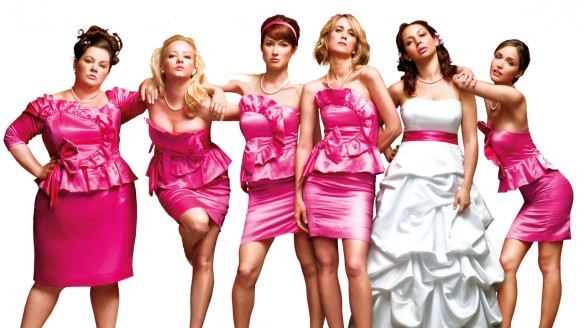 There’s nothing I like more than being in a full cinema that is roaring with laughter. That’s what seeing Bridesmaids was like a few years ago; me, a bunch of my mates and a lot of laughing. Critics and the media were raving about how marvelous it was to have women being funny.

If you don’t know, the story is that Lillian (Maya Rudolph) is getting married and appoints her best friend Annie (Kristen Wiig) as her maid-of-honour. However, Annie is post-break-up, has recently had her cupcake business go under and is pretty much a mess, and between her own craziness and jealousy of Lillian’s new friend Helen (Rose Byrne), Annie makes a mess of all of the pre-wedding events.

So why was it that I dreaded watching it again? It was really two scenes from the film that kept popping up in my mind; the speeches at the engagement party and the food poisoning/dress fitting. These extremely over-the-top scenes were all I could remember, and I hated them. The grossness of the food poisoning scene was just totally unnecessary and on a second watch, it really brings little to the film. Although, I suppose, it got people talking. As for the one-upmanship between Annie and Helen during the engagement speech, it just felt unrealistic and annoying.

Finally, I decided to push through and just watch it and I was delighted to find that these two scenes felt very out-of-place. There was a lot of over-the-top craziness, but there was also a lot of heart. I liked it a lot more than I expected to. I especially liked the friendship between Annie and Lillian, which felt very genuine.

It was awesome to see so many strong female actors in the film, even if some were playing very over-the-top caricatures. I expect that I’ll see whatever is touted as the next Bridesmaids, but I hope it doesn’t force the comedy so much as this did.