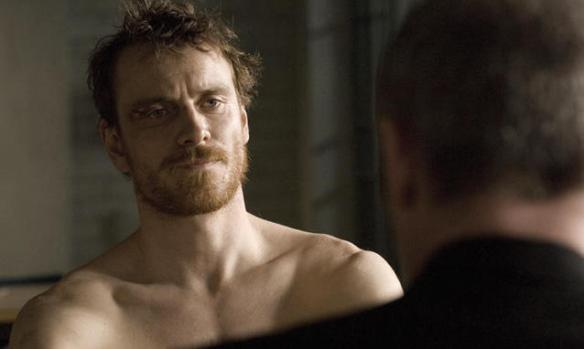 Hunger is a dramatisation of the story of the last six weeks in the life of Bobby Sands (Michael Fassbender), a Northern Irishman who led one of may protests against the British and Maggie Thatcher not recognising them as political prisoners. There was the blanket protest where the prisoners refused to wear the prison outfits and were left naked apart from a blanket and the no wash protest where prisoners refused to wash or have their hair trimmed or be shaved, and smeared their cells with their own excrement. And, finally, the hunger strikes that took the lives of Bobby Sands and eight other protestors.

Wow, this is a tough film to watch. Certainly the last twenty minutes or so, that follows the demise of Bobby Sands as he succumbs to the physical results of his hunger strike. But the rest is also tough; violent, graphic and just plain awful. It’s interesting that the film doesn’t talk about the issues of the protests in that much detail; there is no real discussion on ‘The Problems’, or why Maggie Thatcher was acting in the way she did, or even, really about why Bobby Sands did. It has left those judgments for the audience to make, for those who know little to investigate for themselves. What it looks at is the experience of being in prison for these men.

I think it is a wonderful film, moving and difficult and important.