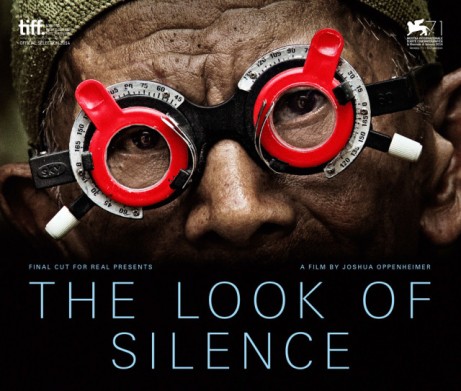 A few years ago, filmmaker Joshua Oppenheimer went to Indonesia and made the documentary The Act of Killing, a film that introduced the world to men who had been part of the killing of thousands of communists (read by this Chinese people, plus a whole lot of other people they just didn’t like). These men are still in power and their actions are celebrated – so much so that they are happy to reenact the killings, and jeepers, some of them are brutal. In The Look of Silence, the film maker takes a man whose brother was killed around this time to meet the people who killed them. It was the Q&A afterwards that explained a lot about how this came about, and I’d recommend watching some of the videos that are available online of Joshua Oppenheimer talking at events.

It’s amazing, horrible, terrible, heartbreaking, awful and totally important. Both films are very hard to watch, but I cannot recommend them enough.

The Act of Killing is available on DVD. The Look of Silence will be screening at Cinema from November 17.

Tagged as Film Review, MIFF 2015, The Look of Silence Review