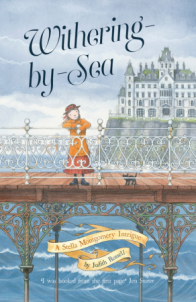 Stella Montgomery lives in the Hotel Majestic with Aunt Deliverance, Aunt Condolence and Aunt Temperance who all believe that children should be seen and not heard. But she has too much adventure in her for that, and before long, she gets into a series of events that could cost her everything – and she learns a few things about her place in the world.

Stella is a great character – feisty and smart, but willing to work with others to get to her final destination. And the bad guys (and there are a lot of bad guys in this book) are nasty – mean, violent and just generally pretty awful. I found some of the dialogue a bit tricky to read in my head, but that did just let me have to fun of playing around with saying it out loud. The book clearly has a sequel, and I can imagine Stella becoming the type of character who live strong in the life of many young people in the future.

Withering-by-Sea won the Children’s & YA Award in 2015 from the Australian Independent Bookseller.