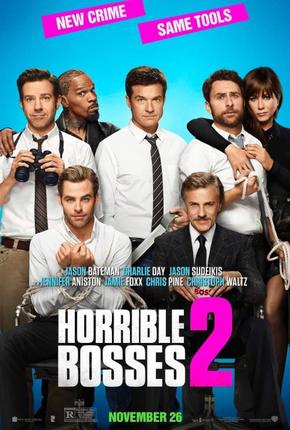 After their adventures in the previous instalment, Dale (Charlie Day), Kurt (Jason Sudeikis) and Nick (Jason Bateman) decide to go into business for themselves with the Shower Buddy a kind of car wash for your shower. When Bert Hanson (Christoph Waltz) and his son Rex (Chris Pine) cause them to become hugely in debt, they devise a ridiculous kidnapping and extortion plan which they attempt, but give up when things don’t go to plan. Unfortunately for them, Rex has decided that it is a far better plan and blackmails them into going through with it – with him as a partner. And it gets ridiculous.

I just had a look at what I thought about he first film – I felt that it wasn’t enough story for a full film, but it was ok. Perhaps that is why I liked this one more – perhaps it had more plot, or something. At any rate, I did quite enjoy this one, with all of it’s filthy humour, and it was good to get a few callback characters like Dean ‘MF’ Jones (Jamie Foxx), Dave Harken (Kevin Spacey) and Dr Julia Harris, D.D.S. (Jennifer Aniston).